Remember to visit the New Website with amazing wall preview tools and much more!

There are few forces in the universe more powerful than being completely honest with one’s self! Case in point; the ink on paper self portrait of Tim Welch was completed in 2002 and was part of his solo exhibit at Governor’s State University. Little did he know it would become foreshadowing of an event that would turn his life upside-down in 2010!

Find out why in the newsletter soon to be released… in the mean time please take a second to Like Tim Welch Art on Facebook and see the latest commissioned pet portraits, watercolors, and acrylic on canvas paintings. 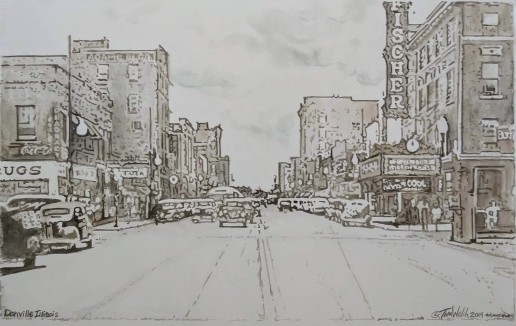 The most recent work is about Danville Illinois, the hometown of the artist as well as some famous names like Dick and Jerry VanDyke, Gene Hackman, and Bobby Short to name a few. You’ll see more art about Danville IL. soon in the artist’s new series.

The watercolor painting above is derived from a photo of North Vermilion Street in Danville during the 1930’s. “I’ve always been fascinated with history” says the artist, “so now my work is drawing more from local and midwestern United States history…”

Abraham Lincoln is perhaps the most famous person to spend time in Danville IL. This watercolor on paper painting was completed in July of 2019 by the artist and its part of his presidential series. The blue represents the depression Lincoln felt late in his life as well as the colors of the Union Army uniforms during the Civil War.

Other recent works include more local nostalgic watercolor paintings about Danville Illinois. Places that no longer even exist or have been turned into something else are common with many towns in the United States. When it’s your home town where you’ve lived most of your life it makes it special to see photos and artwork that conjures up those memories and brings people in the community together.

The Burger Chef in Danville later became a restaurant called Schroeder’s but for many years it was part of the Indianapolis based food chain Burger Chef. Eventually as car-side service no longer became popular with fast food restaurants the building was changed into the brick structure it is now.

This colorful portrait has a unique back story because the artist discovered hidden images in his own painting (that he never consciously intended to put there) years after he painted it. This painting is currently for sale and on display at the Law offices of David Yates and Todd Lewis in Louisville Kentucky.

The artist spent time studying artists like Chuck Close and Andy Warhol in school but more recently he’s studied artists who are masters of marketing like Banksy and Damien Hirst. There are numerous ways an artist can earn an income for their work and it doesn’t HAVE to be anything that can hang on the wall! It could be a book or an installation or whatever your mind can conceive could be called art.

It doesn’t mean it’s GOOD ART worth spending your money to own. Many people see art as an investment that will increase in value and be passed on for generations. People buy beautiful art because they want to enjoy looking at it. Having quality art in your house makes it a home because you feel wonderful when you’re surrounded by colorful artwork!

This painting is of a college friend of the artist and there’s yet another fascinating backstory to this piece as well. It’s important to know what the art you’re buying and hanging in your home is about. What does it mean? What do you tell your friends when they ask why you love it so much, why did you buy it, or, where do I get one?

(It’s really easy to buy because all you have to do is contact the artist) Facebook, Phone, Whatever! its easy!

The acrylic on canvas painting pictured above also has pieces of maps glued to it. The maps represent the personality of the subject, Adam. He’s an author and an outdoorsman who loves to travel. Adam feels most in his element when he’s in an adventuresome state of mind.

Yes it is for sale and you know what to do (contact the artist). 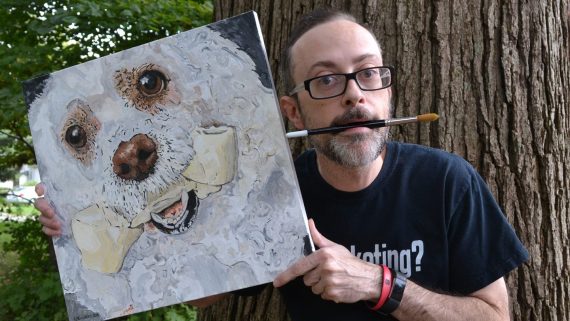 If you really want a commissioned pet portrait or any other kind of painting (from just about any photograph) Tim Welch Art can do that as well.

This painting is called “Battle of the Mind” and the artist painted it on pages taken from book titled “The Human Brain”. Its a pretty simple story to figure because a picture is worth a thousands words as the old saying goes. The painting is about being in control of your life using your thoughts and feelings. It’s the one universal power possessed by every human only most people don’t know how to tap into it.